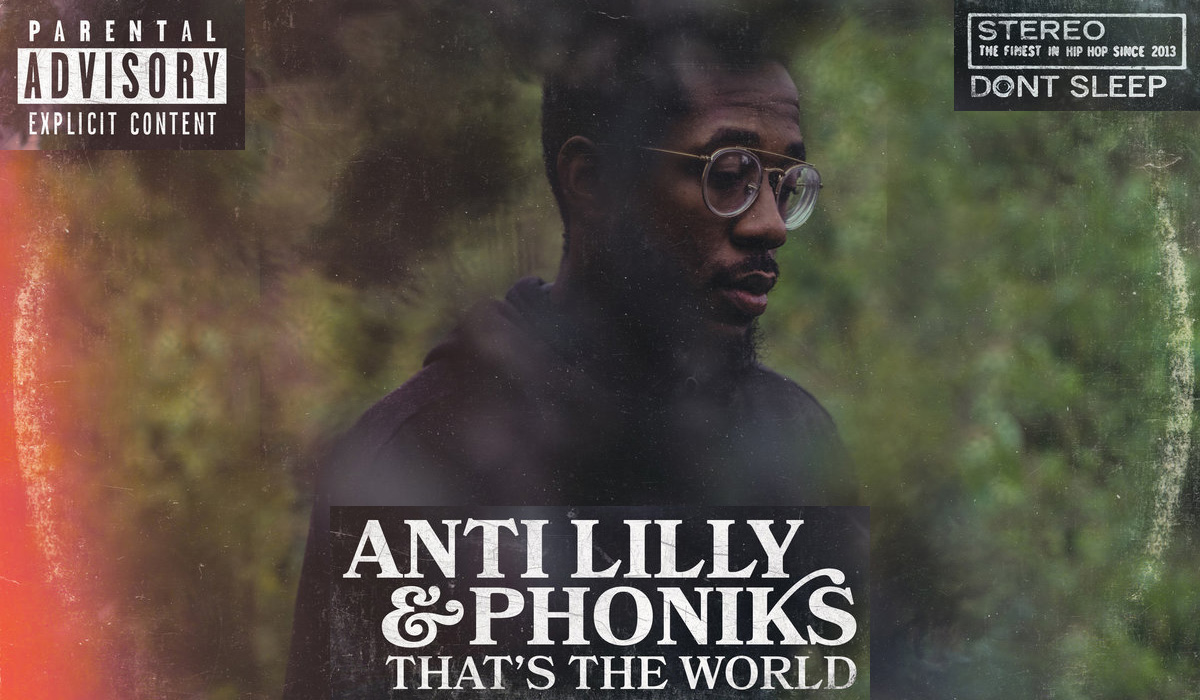 That’s The World by Anti-Lilly & Phoniks: A Lesson In Poetry… That’s The World is a delightfully upbeat Hip Hop album. The jazz elements of Phonik’s production matched with Anti-Lilly’s voice is a perfect recipe for great music. While I do not like to compare musicians, as their individuality is essential. Anti-Lilly packs the thoughtfulness and sophistication of a young Kendrick Lamar. It’s the mellow beats and introspection for me, it’s a classic project.

On the Phoniks produced the album, Anti draws listeners in with his story. You are drawn in by the mix of anecdotal lessons as bars and relatable self-critique. We’re all kind of on this hamster wheel of life – trying to balance work and responsibilities on top of trying to grow and chase dreams. All the time being our own worst enemies. Anti alludes to this on Can’t Stop, speaking on his struggle to get sober. The playfully authentic double entendre of not being able to stop the bad habits, but also refusing to stop pursuing his dreams is many of us today. “Tell me whats the destination when you tryna quit runnin’”

Father’s Day is another notable album track. The dialog about paternal relationships generally falls in a dichotomy where it’s either ultra-positive or just not good. Father’s Day is unique in that he acknowledges his anger towards his father and his wrongdoings, while still drawing parallels between himself and his father. Both wishing him a Happy Father’s Day and analyzing him as a person. Saying he brought the best to his children but brought their mother way too much pain. It is an interesting dynamic that does not get discussed enough when people talk about being raised by two parents.

That’s The World is a perfectly fitting title for a nearly perfect album. Phoniks did a great job of making the production so jazzy that without paying attention to the lyric, you still find yourself bobbing your head to the melodies. That being said, you should definitely listen to the lyrics. The entire album is pure vibes. Give That’s The World a listen and let us know what you think. Stay tuned for coming selections in rotation on Big Noise Radio.

Keep it locked to Big Noise Radio for authentic hip-hop music and culture from Anti-Lilly & Phoniks!