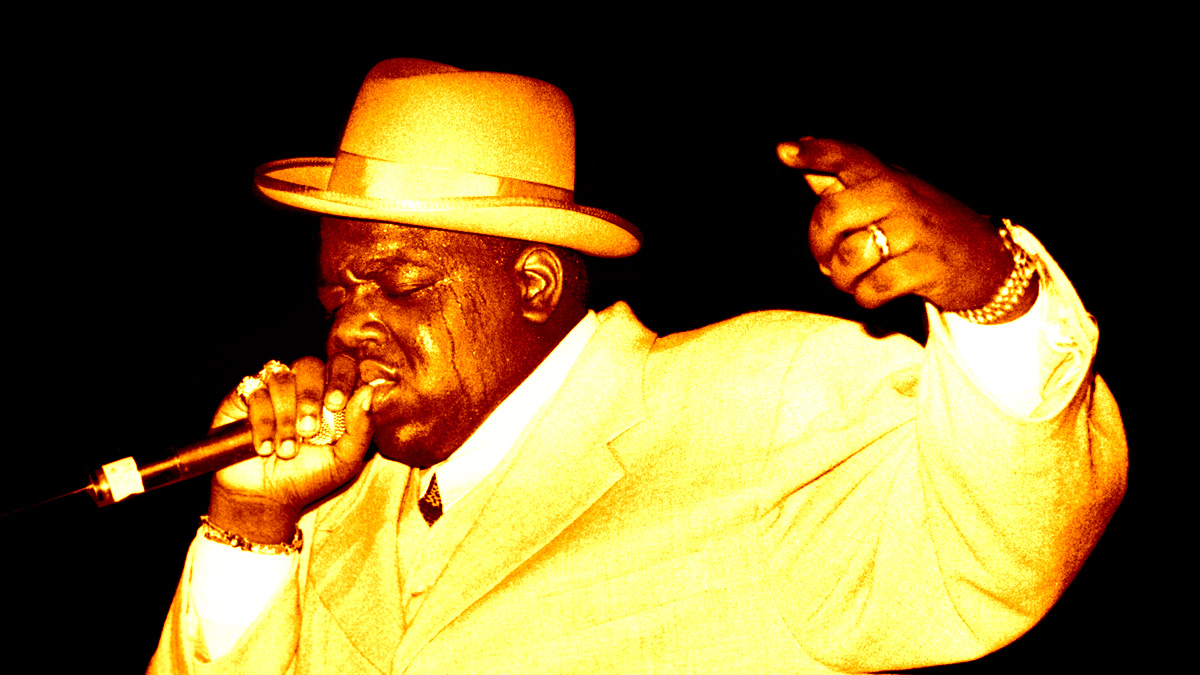 The image of young Biggie Smalls aka Notorious B.I.G. – holding the MIC, rapping on a New York street corner is iconic to hip-hop history. As his flame burned bright, it was taken away from us far too soon. We will miss the creative lyrics that delivered clever images through his music. Rest In Peace Christopher Wallace. The vocal history you created such as the House Shoes B.I.G.Re:Imagined will always be with us.

Detroit’s DJ House Shoes brings us a collaboration of 14 Biggie Smalls remixes from, I believe 12 including House Shoes, dope hip-hop producers. Nottz Raw from Virgina definitely puts it down, starting off the project with a crazy dope interpretation of “Kick In The Door”. DJ House Shoes has definitely been putting in his work, just take a peek at his Soundcloud Page to see what I’m talking about.

The project is called “House Shoes B.I.G.Re:Imagined”; “I got a lightbulb. Sent a zip of B.I.G. acapellas to the homies. This is the result. Very satisfied with what the homies cooked up. Enjoy.”

About The DJ: Detroit Hip-Hop’s Ambassador to the World, Michael “House Shoes” Buchanan has been an integral part of the long burgeoning Motown resurgence. Just ask anyone coming out of Detroit to confirm this.

House Shoes, a resident DJ at the hip-hop staple St. Andrews Hall, Detroit MI, from 1994-2004 has had personal influence over a full generation of well respected emcees, producers, and then-future DJs. Four-time winner of the “Best Hip Hop DJ” in Detroit, he has used his platform to expose some of the best and brightest talent his city has had to offer.

As a DJ, ‘Shoes has toured extensively throughout the U.S., Europe, and Australia with artists Guilty Simpson, Illa J, Exile, Aloe Blacc, Percee P, Phat Kat, Slum Village and Elzhi, to name a few, as well as on his own, gaining the respect of acts far outside the scope of Detroit hip-hop. House Shoes also performed as tour DJ on Mayer Hawthorne & The County’s Spring 2010 16-city headlining U.S. tour.

Bio (1972–1997): Synopsis: Born as Christopher Wallace on May 21, 1972, in Brooklyn, New York, Biggie Smalls, also known as Notorious B.I.G., became a drug dealer at a young age. He started experimenting with music as a teenager and, not long after, befriended Sean “Puffy” Combs. His 1994 debut album, Ready to Die, was a smash hit, and his long-running feud with fellow rapper, Tupac Shakur, helped to shape his career. Biggie was killed in Los Angeles on March 9, 1997.

Early Years: American hip-hop star Biggie Smalls was born as Christopher George Latore Wallace on May 21, 1972 in Brooklyn, New York, in the neighborhood of Bedford-Stuyvesant. Biggie, or “The Notorious B.I.G,” as he’d later become known, experienced a rough childhood—at an early age, he was surrounded by drug addicts and dealers. As a result, by his early teens, Biggie had joined the life that was all around him. “Hustlers were my heroes,” he once said. “Everything happened on the strip I grew up in. It didn’t matter where you went, it was all in your face.”

At the age of 17, Biggie was arrested for selling crack, and spent nine months in a North Carolina prison before making bail. As he navigated his young, uncertain life, Biggie started making music. He hooked on with a crew called the “Old Gold Brothers,” and began experimenting on his own.

Commercial Success: Around his neighborhood, Biggie Smalls, as he called himself then, began building a reputation as a musician. After a tape of his landed in the hands of Mister Cee, a well-known DJ, Smalls was featured in the hip-hop publication, The Source.

The article was enough to catch the attention of Sean “Puffy” Combs, a young producer at Uptown Entertainment, a New York-based label specializing in hip-hop and rhythm and blues. When Combs split off from Uptown to start his own label, Bad Boy Entertainment, he brought Smalls with him.

Immediately, The Notorious B.I.G., as he now called himself, got to work, appearing on a 1993 remix of Mary J. Blige’s single, “Real Love,” and followed it up with a second Blige remix, “What’s the 411?” His debut as a solo artist came with the single, “Party and Bullshit,” on the soundtrack to the film, Who’s the Man? (1993).

In 1994, The Notorious B.I.G. released his debut album, Ready to Die, which told the story of his life, from drug dealer to rapper. Backed with hits like “Juicy” and “Big Poppa,” the record went platinum and the young hip-hop artist became a full-fledged star. That same year, The Source named the rapper “Best New Artist,” “Best Live Performer” and “Lyricist of the Year.”

As his star power increased, Biggie did his best to share his prestige. He backed the work of several rappers that he’d originally performed with while starting out in Brooklyn, and took to the studio in support of other artists on Sean “Puffy” Combs’s label. He also teamed up with such stars as Michael Jackson and R. Kelly. By the close of 1995, Biggie was one of music’s best-selling and most sought after performers.

Troubled Times: However, success and wealth hardly brought peace to Biggie’s life. In the immediate aftermath of Ready to Die’s popularity, the rapper found himself in constant fear. In 1994, he told The New York Times that he was disliked for having more money, which came with his fame. The large rapper—at 6 feet and three inches, and tipping the scales at nearly 400 pounds—said that he jumped whenever the door to his apartment building opened, fearing that someone might want to hurt him.

Biggie’s fear led to anxiety, which led to spurts of aggression. In May 1995, he allegedly beat up a man after they got into a dispute over a canceled performance. Later, he took a baseball bat to a group of autograph seekers. His most famous battles, however, occurred with others in the hip-hop industry, most notably with Tupac Shakur, Marion “Suge” Knight and Death Row Records. The rivalry turned into an East Coast-West Coast feud (with Combs and Biggie representing the East), and the tension escalated in 1994, when Shakur and a member of the Wu-Tang Clan were shot and robbed. The two men survived and Shakur came out blazing, accusing Biggie and Combs of orchestrating the attack. Both vehemently denied the accusation.

Shakur added fuel to the flames with a pointed slam on the East Coast rap world in the single, “Hit ‘Em Up,” in which he claimed to have slept with Biggie’s wife, Faith Evans. In September 1996, East Coast-West Coast battle heated up even further, when Shakur was murdered in a drive-by shooting in Las Vegas. Rumors of Biggie’s involvement immediately began to make the rounds, and when the rapper was one of the few hip-hop artists not to make an appearance at an anti-violence summit that was held in Harlem a few weeks later, the finger-pointing intensified. …( read more )