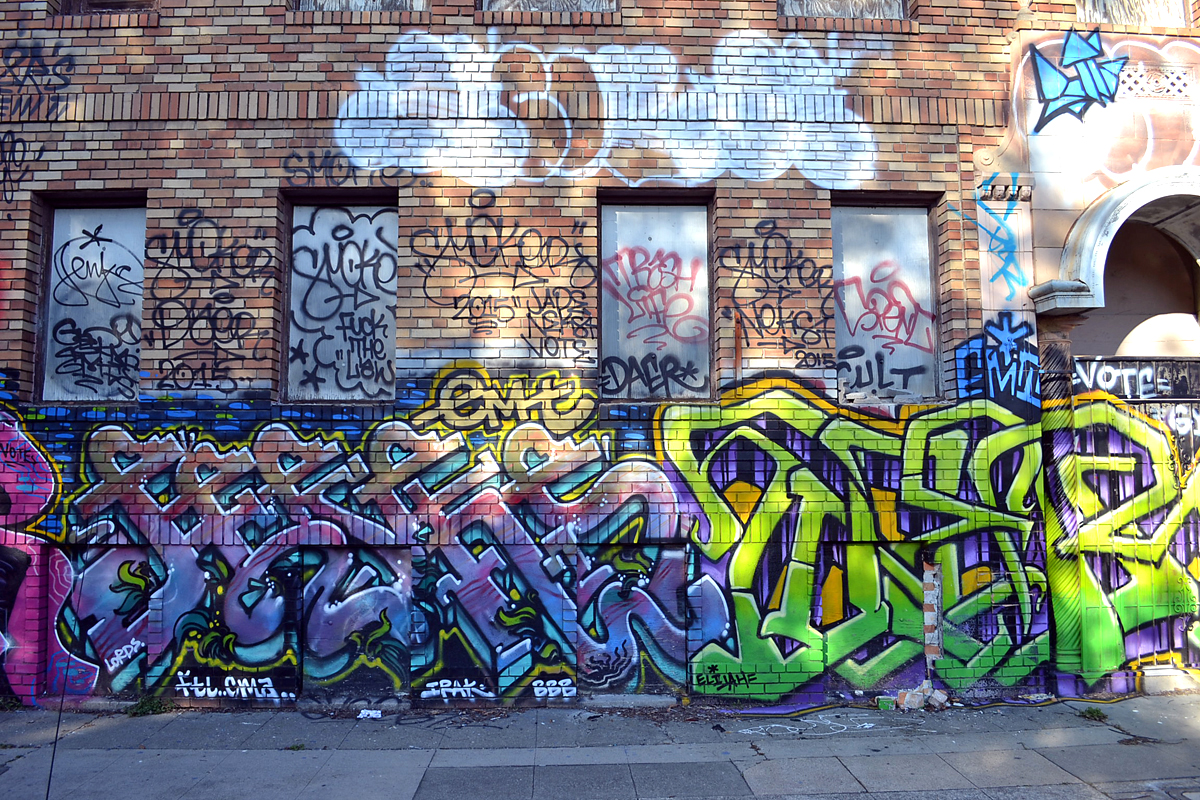 Throughout the last few decades… of the countless folks whom have contributed to the hip-hop art-form or the so called collective known as “The Culture”, there have only been a few individuals who have been influential in their own right. One of these individuals goes by the name P.H.A.S.E. 2… He has been putting in work since before day one and is responsible for some of the fashion, dance & aerosol trends that are hip hop. We recently caught up with the five element ninja-style assassin for an interview.

Q. Big Noise: What’s your background in art?
A. PHASE 2: Well none really. You do it in kindergarten..I guess…drawing superheros…(Marvel of course) and discovering I could…so I did…and then experimented with different things…like from comics to portraits.

Q. Big Noise: What is your creative process like?
A. PHASE 2: Feel something create something…that’s basically it.

Q. Big Noise: Are you self-taught or formally educated / tutored in painting?
A. PHASE 2: Well I don’t really believe that you can “teach” talent so to speak. You can teach technique. You can nuture and hone a skill…but talent creativity that’s within. I feel all the stuff I was “taught”..on most levels was more like programmed, and basically what’s programmed is one dimensional and supposedly “The Way”. But when you look around you…all the people who broke that chain are the ones we notice or the ones who invented something that didn’t exist before they wandered outside of that circle that is basically a container for the norm or a basic…that really just closes ones mind from a potential they may have within.

Q. Big Noise: How has your style changed over the years?
A. PHASE 2: I don’t know like did I ever really have a “style” from fashion…to so called art…to tastes. Some things never change and others change while staying the same…go figure. I evolve by nature. Its retarded to see guys who were around back in the day who never evolved mentally or creatively…and basically don’t really have an over-standing of the full magnitude and or infinity of certain things that we do and created…if we stayed on wicky wicky and yes yawll..the Roc Raida’s, Q Bert’s & Rakim’s would’ve never existed. Thus raising the bar for the next level to continue. Technically speaking evolution brought street culture into the foreground…innovation…transformation…vision beyond whats in front of us…heard and seen.

Q. Big Noise: What do you call your style of painting?
A. PHASE 2: Mine…with many inspirations…allot unrelated to art as in the art world or the so called art I’m a collaborator and conspirator of…

Q. Big Noise: What is your favorite painting medium?
A. PHASE 2: I don’t really have one. Actually I really don’t like paint, especially the toxic kind. I basically use what works. I think when you (1) Being accustomed to using certain things because in a way unconsciously see it as “tools of the trade”…you can find yourself limiting what you can do and limiting your creative process…as well, maybe not even doing work on a level that you are capable… because you are better taking it beyond the conforms of what you are accustomed to. I have a better hold on what I do these days…and the art I created past & present. So I see it from the math and science side…am I making sense verbally?

Q. Big Noise: What subject if any have you not painted or created that you would like to?
A. PHASE 2: I am spontaneous, so “subject matter” doesn’t really enter my mind on “what next” thought process. I basically do what I like… or what has meaning for and to me. I could wake up…and something may hit me…and I want to express it…so…even I don’t know whats going to happen next. I do a bunch of different things…so one never knows.

Q. Big Noise: What other medium if any would you like to try?
A. PHASE 2: Guess it remains to be seen. I am spontaneous, there’s nothing that I am using now that I’ve never used before…just that I used it less…and I find it more suitable now…to what I am skill full at as opposed to what I don’t feel suits my creative process…and skills.

Q. Big Noise: What is your primary art inspiration?
A. PHASE 2: The incomprehensible…

Q. Big Noise: Any new art shows exhibitions, galleries or venues coming up?
A. PHASE 2: Call it what you may, I’m always doing something…I just never make a big to do about it…even if it stays in the basement or underground.

Q. Big Noise: What’s your proudest moment related to your paintings or artwork?
A. PHASE 2: Proud wouldn’t be the word …I don’t feel I’ve really scratched the surface. Knuckleheads and know it all’s like to pigeon hole you and put a label on you (me) when they don’t even over-stand what it is I do. And the fact that I was never a one dimensional so called artist…if anything, creatively I want to out do whatever I’ve done and do monumental things. Not the stupid shit that I may have started out with as far as publicly..You have to grow. Some of what I see going on should have been done in the 80’s or its been done already… so whats the point, take it to another level.

A lot of what we started has been misconstrued by forces in and outside of our circle. Its like concentrated orange juice. Not the best it could be..and when you’re dealing with a deaf dumb blind denial laced massive ..and people who aren’t going to tell the truth either way… you end up with something less than the more that it actually is.. Are any of the art forms we created that are in the mainstream… “pure” any longer?

Hopefully I can put some things out there soon…as far as the mediums are concerned…that I’m really feeling..its like to the future past, because some of the stuff I did ages ago…time didn’t really catch up with…and my focus is different. Billy J needs to stop fronting tho!

Q. Big Noise: And your worst?
A. PHASE 2: There’s definitely some trash I did out there ..people who got it some how…and are trying to get payed off it… won’t admit it because they are all about money.
I’ve never been on drugs…so even for me it’s hard to believe that its out there ..but why front? HAHAHAHA …That’s part of dealing with a medium…and sorta following your own lead when its not really leading you anywhere. I’d never just do a work just to do it…so whatever it is.. I probably tried but didn’t quite hit the mark.. and didn’t really catch it..till later…(that it was a miss).

Q. Big Noise: Any living artist that you’d like to meet?
A. PHASE 2: No idea…more into a different art..but there are people who we grew up on that it would’ve been nice to shake a hand with. I am inspired by peoples strength, strangers and cats that just think and excel on another level.

Q. Big Noise: One place on the planet where you’d like to go paint?
A. PHASE 2: I don’t know about painting…but anywhere away from this hemisphere…where there’s a forum and an audience who appreciates whatever I do.

Q. Big Noise: What was the concept behind the “Do This” 1977 Silhouette Tee?
A. PHASE 2: Well, there’s some history there… that’s around the time I more or less injected the idea that we as a collective should start promoting hip hop on the same level so to speak as the other jams that were going on ..like album covers (J.B.!!) and believe it or not… the marange party joints (flyers) that were all over the Bronx…I had done stuff like that for the crew I was getting together…and some other jams but at that time it wasn’t a regular thing in hip hop culture. Herc had something going on with this kid Kareem years before basically hand done with some slick drawing but that was about it…and then there wasn’t really anything style wise going on…so once I started that everyone else followed suit..and it became a trend and the norm. I could go in any direction…drawing…just lettering ect…then I created a style I called Funky Nous Deco that seems to kind of epitomize “The Hip Hop Flyer”… its a style that through out the years everyone from Nike to Dave Chappelle’s block party cover have mimicked. The silhouette was one of the elements I used allot so to commemorate it “1977” is the number.

Q. Big Noise: Why Japanese?
A. PHASE 2: Why not?…We are asiatic folk!! HAHAHAHA..for whatever that’s worth. It would be type boring for me to just use the same old same 26 letters. Basically I like the esoteric flavor of it…though technically it has meaning “Do This”. I like the style its reminiscent of Arabic, Thai and Sanskrit…for me its itself its own hieroglyphic of sorts because most people if they aren’t Japanese they wont have any idea of what it is…or if its anything at all. It has a mystique about it and it says something without being obvious…its an old logo that I had decided to flip again.

Q. Big Noise: Are there any other t-shirts or apparel in the works and where can heads purchase them?
A. PHASE 2: Well funny thing is before we put the “1977” shirt out I had reached out to a little company in Japan called Mynority Classics…what I really liked about them is that they had something to say. Something intelligent and meaningful something beyond just playing music or supposedly doing the culture so we decided to do a tee shirt. What was really creative was that DJ Sarasa one of the owners of the company wanted to rep the ladies…and through her keen sense of innovation she suggested that there be 3 gals instead of 3 guys on the tee…and to simulate the same poses as the original male design had. I thought that was ill since “Do This” didn’t particularly translate in the same sense as it would here in America (even though no one here would even have a clue either way) so we decided on the phrase “Rock This” and so it is..

Anyone who wants them can purchase them through Mynority Classics…..for me this is what I do ….CREATE SHIT!!! So even when I’m fed up with so much superficiality around me…from the fake ass lame and shallow coming out of the woodwork half ass repping past and present….that we will get into at another time…There’s something bigger that still motivates me to keep a flame in any direction that pops into mind.

Q. Big Noise: Anything else you care to share that’s art related?
A. PHASE 2: Probably would just be bombs…the state of our state sucks…

Q. Big Noise: Mega props and thanks fam! …Until the next time any last words for our readers?
A. PHASE 2: Cyanide.. laced…mental…

Keep it locked to Big Noise Radio for authentic hip-hop history and culture from P.H.A.S.E. 2!